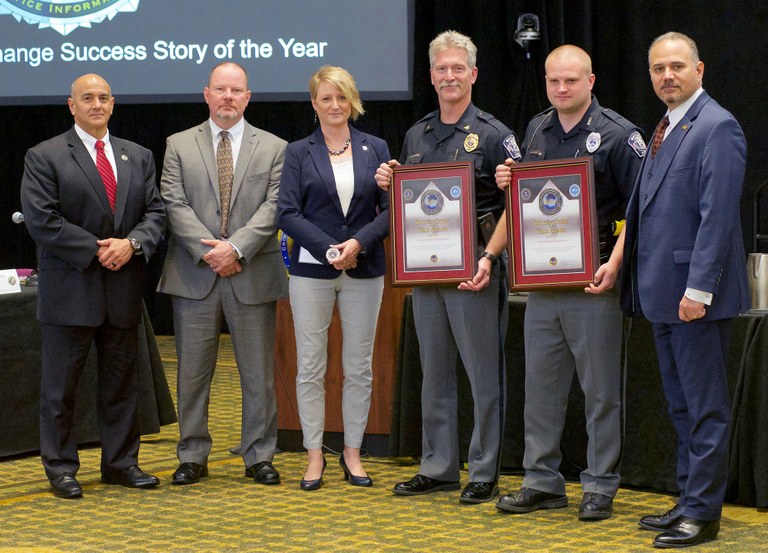 Officer Riemersma was selected for the award because of his investigative use of the National Data Exchange (N-DEx) system to assist with a child predator case that ultimately led to an arrest and subsequent federal indictment on 16 counts of child sex crimes.

In 2018, Officer Riemersma began working on a child exploitation case. A 12-year-old boy was being solicited online and had sent the suspect sexually explicit images. The suspect was pretending to be a wealthy prince named Daniel David De’Rothschild living in Beverly Hills, California. In reality, he was unemployed and lived in Philadelphia, Pennsylvania.

After obtaining a search warrant for the suspect’s Instagram account and IP address, the officer got the possible name and address of the individual, a 49-year-old man who persuaded boys as young as 8 years old to provide sexually explicit images of themselves.

Officer Riemersma logged onto the FBI’s N-DEx system and searched the suspect’s name, finding reports from the Philadelphia Police Department and the neighboring Upper Merion Township Police Department. He identified two more suspected young male victims with whom the suspect had suspicious interactions.

In August 2019, the suspect entered a guilty plea to four counts of enticement of a minor to engage in illicit sexual conduct, six counts of manufacturing and attempted manufacturing of child pornography, one count of transferring obscene material to a minor, four counts of receiving child pornography, and one count of possession of child pornography. At sentencing, he faces a statutory maximum sentence of life imprisonment, a 15-year mandatory minimum term of incarceration, 5 years up to a lifetime of supervised release, a $4,000,000 fine, mandatory restitution to his victims, and $76,600 in special assessments.

Officer Riemersma stated, “I have used N-DEx to expand and solve many cases that may have gone unsolved otherwise, ranging from organized retail-fraud crime groups to identifying numerous victims of sex trafficking in large-scale online escort operations. N-DEx is an invaluable tool for any law enforcement officer, and it should be a part of every investigator’s toolbox.”

The N-DEx system is an unclassified national strategic investigative information sharing system that brings together records from across the nation.

All this information promotes public safety, from the initial patrol stop to the supervision of an individual reintegrated into the community.

For more information about the N-DEx system or how we can help your agency, visit www.fbi.gov/ndex or contact us at 304-625-0555 and ndex@leo.gov.