Built on the west grounds of the Oklahoma Department of Public Safety Headquarters in Oklahoma City, the Oklahoma Law Enforcement Memorial is the first permanent monument built in the United States to honor all fallen officers of a state. Dedicated on National Peace Officer’s Memorial Day on May 15, 1969, the monument honors tribal, municipal, county, state, federal, and foreign officers who died in the line of duty while serving the citizens of Oklahoma. Almost half of all deputy U.S. marshals killed in the United States are honored on this memorial.

A pebble-concrete sidewalk lined with flower beds encircles the memorial’s central plaza. Originally, the monument consisted of seven granite pieces set in an arbor of evergreens, with the flags of the United States and Oklahoma flying nearby. Today, six additional stones are set outside of the original memorial plaza. There are 682 names engraved on the granite tablets, and 150 more will follow with the purchase of a new stone. Plans exist to add another tablet in the near future to honor Oklahoma’s fallen K-9 partners.

An open granite Bible displays two verses on the displayed pages. The round granite base of the center piece is etched with the words of former FBI Director J. Edgar Hoover: “Justice and order among free men, with humility before their creator, are preserved through loyal and dedicated law enforcement.” The granite base of a sundial is engraved with quotations from four former U.S. presidents:

“The execution of the laws is more important than the making of them.”

“No man is above the law and no man is below it, nor do we ask any man’s permission when we require him to obey it.” 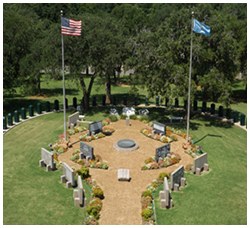 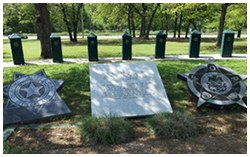