On September 11, 2001, the Marfa, Texas Border Patrol Sector was conducting a groundbreaking ceremony for its new Alpine Station facility. The ceremony was halted when the report of the attacks on the East Coast was received, and all personnel were put on full alert. Ten years later, on September 11, 2011, the Alpine Border Patrol Station 9/11 Memorial was dedicated. This tribute to the brave men and women who lost their lives was designed and constructed by Alpine Station agents, Marfa Sector employees, and retired border patrol agents. A steel artifact, a corner piece of the World Trade Center weighing 1,300 pounds and measuring eight feet across and six feet tall, was transported from New York City to the Alpine Station by two border patrol agents. The community turned out to welcome the piece in a somber procession led by the local sheriff. At the dedication ceremony, Marfa Sector Chief Patrol Agent John J. Smietana, Jr., stated, “In spite of the terror of the moment, a great number of law enforcement officers, fire fighters, and others continued to do their jobs with the last full measure of devotion. This simple metal beam will be displayed as a reminder of their courage and sacrifice.” The monument is located on the front lawn of the Alpine Station and is open to the public during daylight hours. 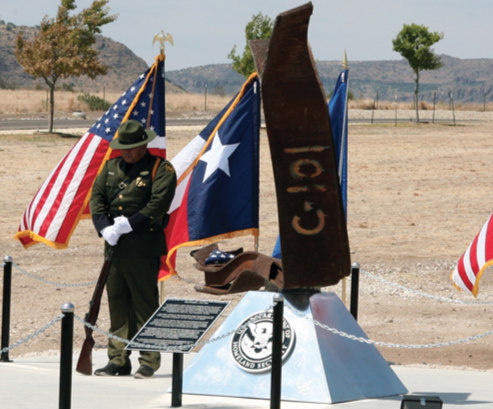