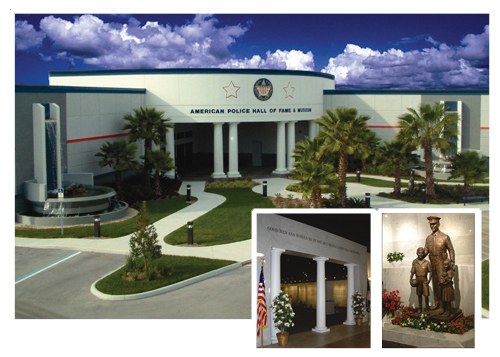 In 1960, retired Police Chief Gerald Arenberg established the American Police Hall of Fame Memorial and Museum in a 3,000-square-foot building in Northport, Florida. It relocated in 1989 to a 38,000-square-foot, three-story building in Miami, Florida, previously occupied by the FBI. In 2003, land was purchased in Titusville, Florida, an area known as the Space Coast, where a new 50,000-square-foot facility was built. It is the nation’s first and largest museum and indoor memorial dedicated to law enforcement officers nationwide who were killed in the line of duty. The name, rank, and department of over 8,300 officers killed from 1960 to the present, with a few predating 1960, are engraved on Italian marble walls. The engraving is done one time per year by a local artist/engraver. In the center of the octagon-shaped memorial, a handmade, stained-glass dome hangs over the tomb of the unknown peace officer. The statue of an officer with two small children stands watch at the head of the tomb. Above the entrance to the memorial is the inscription “Good Men and Women Must Die, But Death Cannot Kill Their Names.” The exterior of the building consists of twin waterfalls flowing down the walls onto huge North Carolina river rock. The current facility is open to the public every day except Christmas, Easter, and Thanksgiving.