An Garda Siochána, the national police service of Ireland, has a long established tradition of working closely with communities across the country. It has been associated with Dublin Castle since the foundation of the state. The Garda Memorial Garden in the Dubhlinn Gardens, Dublin Castle, opened on May 15, 2010. The memorial honors An Garda Siochána members killed in the line of duty. Their names are inscribed in stone within the garden. A round glass sculpture commemorates the sacrifice of the families left behind. A stone sculpture provides a tribute to all deceased members of An Garda Siochána, the Royal Irish Constabulary, and the Dublin Metropolitan Police. The principal concept behind the design is the way that sudden unexpected death brings an abrupt end to life’s natural cycle. The basis for the design is a tree trunk felled before reaching maturity, exposing the rings, which represent each year of life. The radiating rings also represent ripples in the surface of a pool. The seemingly solid granite wall is pierced by a sharp glass shard representing the fragility of life. The commissioner of An Garda Siochána expressed that this is a very public and poignant tribute to those who lost their lives while serving. It also recognizes the great loss and suffering that their families, friends, and colleagues endure. 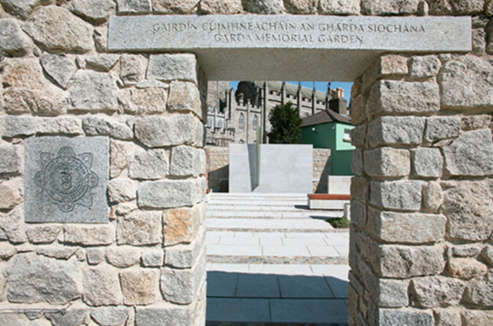 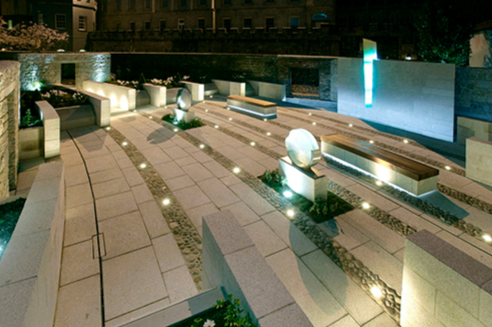