On May 26, 2000, the Columbus, Ohio Division of Police memorial was dedicated. The original design was created by retired officer Tom Hayes, who became the division’s sketch artist after he was shot and paralyzed in 1979 when he responded to a disturbance between two teenagers. The monument features a bronze Columbus Division of Police badge with a black mourning band atop a gray granite pillar. The names of 52 fallen officers are inscribed on black granite panels. An inscription on the pillar reads, “Served Faithfully, Sacrificed Valiantly, Remembered Eternally, Dedicated to the Memory of Our Fellow Columbus Police Officers this 26th Day of May 2000.” Tom Hayes’ name was added to the memorial after he succumbed to his injuries on January 10, 2011. Through their kindness and generosity, active and retired police officers, civilian employees, family members, and friends of the Columbus Division of Police made the memorial possible. This lasting tribute to the officers who lost their lives in the line of duty is located on the bank of the Scioto River. 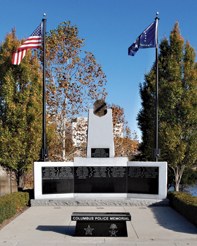