The Fair Lawn, New Jersey Police Department presents its memorial dedicated in honor and memory of Officer Mary Ann Collura, an 18-year veteran who made the ultimate sacrifice in the line of duty on April 17, 2003. The monument, dedicated on April 15, 2006, sits in front of the Borough of Fair Lawn’s Municipal Building. A plaque in front of the memorial tells her story and the meaning of the statues. Fellow officers, friends, citizens, and family members want the monument to memorialize her sacrifice and her life forever.

Officer Collura was serving as the acting sergeant on the night of April 17, 2003, when she heard a radio transmission that an officer from the Clifton Police Department was attempting to stop a fleeing vehicle, which, a short time later, crashed on the front yard of a Fair Lawn church. As the Clifton officer pursued the suspect on foot across the church property, Officer Collura pulled up. Ultimately, the subject, who had a concealed weapon, shot Officer Collura above and below her bulletproof vest and also shot the Clifton officer, shattering his right arm and leg. The suspect then got in Officer Collura’s patrol vehicle and proceeded to strike her with it as she crawled toward the other wounded officer, thus killing her. 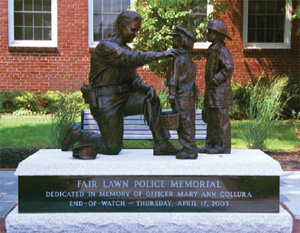 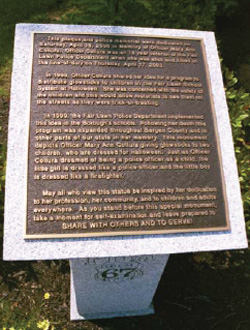 The FBI Law Enforcement Bulletin seeks submissions from agencies who wish to have their memorials featured in the magazine’s Bulletin Honors department. Needed materials include a short description, a photograph, and an endorsement from the agency’s ranking officer. Submissions can be mailed to Editor, FBI Law Enforcement Bulletin, FBI Academy, Quantico, VA 22135, or e-mailed to leb@fbiacademy.edu.