On May 4, 2010, the Fallen Officer Memorial Statue was dedicated to those officers who made the ultimate sacrifice while serving the citizens of St. Charles, Missouri. The memorial is located in the front of the St. Charles Police Department Headquarters, near the public entrance, and was made possible through a cooperative effort between the city of St. Charles and local business leaders. The statue, dubbed “Officer Patronus” (Latin for Protector), was named by the men and women of the St. Charles Police Department. Officer Patronus stands in memory of those who died in the line of duty and in respect for those who serve today. 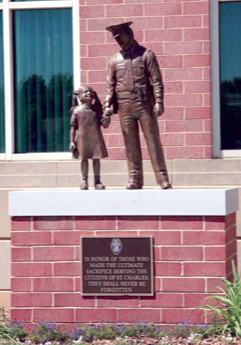