Chief James Mulligan and his wife, Margo, wanted to honor all of the people who have served on the Georgetown, Massachusetts, Police Department and in other law enforcement agencies. They donated funds and initiated the memorial project. The monument, designed after the Georgetown Police Department badge, is made of Vermont granite. In the center of the monument is the Georgetown Town Hall, the American flag, the state flag, and the seal of Massachusetts. The image of a Revolutionary War cannon called “Old Nancy,” taken during the war from a British ship and now housed in the Georgetown Town Hall, also is depicted in the center of the monument. On September 25, 2010, the memorial was dedicated to all men and women of law enforcement. It is located in front of the Georgetown Public Safety Building in the memorial garden. At nighttime, it is lit with a blue light so it always can be seen as a sign of appreciation for the efforts of all law enforcement. 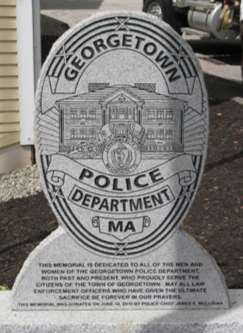