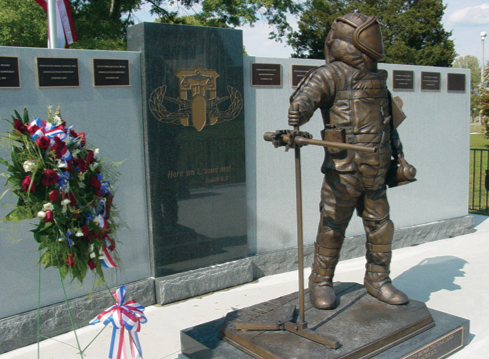 At the Redstone Arsenal in Huntsville, Alabama, the Hazardous Device School (HDS) Bomb Technician Memorial, dedicated in April 2007, honors all public safety bomb technicians who died in the line of duty while performing a hazardous device operation or response. Funded through voluntary donations, the memorial’s bronze statue depicts a bomb technician wearing a full protective suit and carrying an X-ray machine and disruptor, as well as three essential pieces of hazardous device safety equipment. The statue faces out toward HDS in the same manner a graduate would look back to the school for knowledge and guidance. Behind the figure, a marble wall displays the names of the fallen bomb technicians on brass plaques, along with an inscribed bomb technician badge and the biblical verse Isaiah 6:8 in the center. HDS, a joint effort between the FBI and U.S. Army, constructed the memorial to honor the bravery and courage of those who heroically paid the ultimate sacrifice for their work.