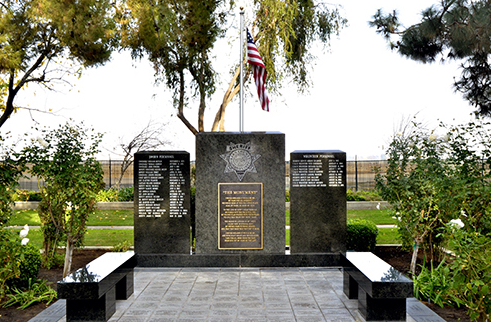 The Kern County Sheriff’s Office Memorial, located in a park area east of the sheriff’s office headquarters in Bakersfield, California, was unveiled on October 30, 2002. The monument consists of granite pillars engraved with the names of 31 sheriff’s office sworn and volunteer personnel who paid the ultimate sacrifice from 1873 onward while serving the citizens of Kern County. There are benches on both sides of the memorial where individuals can sit in quiet reflection. The monument was made possible through private donations from businesses, citizens, and sheriff’s office employees and their families. Donors were recognized with an inscribed brick bearing their own words inlaid at the base of the memorial. The monument recognizes the dedication and courage of those who gave their lives while performing their duties.