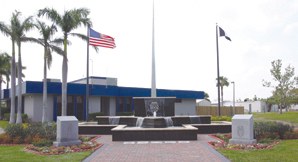 Lantana, Florida is a small coastal community with 10,000 residents. After one of its police officers was killed in the line of duty in 2001, the police department awards committee began working on a memorial to fallen officers.

In 2003, after years of hard work and determination, the first pieces of granite arrived at the police department. On May 23, 2003, a groundbreaking ceremony was held for the Lantana Police Fallen Officer Memorial. Three years later on May 17, 2006, the police department dedicated the memorial to all officers who have given their lives in the line of duty.

Located between the Lantana Police Department and the town hall, a brick paved path leads to a granite structure with a spire and a fountain surrounded by flowers and shrubs. The tri-level fountain, contained within four pools, is based on the three phases of the cycle of life. On either side of the fountain, two stone monuments pay lasting tribute to the town’s officers killed in the line of duty. Adjacent to the memorial is a bench dedicated to the victims of September 11.

Annually, citizens and law enforcement officers attend a special memorial service at the site. The Lantana Police Fallen Officer Memorial is open to the public 365 days a year. Everyone is welcome to pay tribute to the men and women of the Lantana Police Department who have made the ultimate sacrifice.