In 2000, personnel from the Baldwin County, Alabama, Sheriff’s Office decided to construct a Law Enforcement Memorial Park. They chose a sculpture entitled “Call to Duty.” The sheriff’s office took several detailed photographs of the agency’s uniform to ensure the sculpture would resemble one of its officers. The details in the uniform, insignia, duty belt, and, even, the bottoms of the shoes match. Dedicated on June 15, 2001, the memorial honors officers who gave their lives in the line of duty. A plaque on the base of the statue includes the inscription “Dedicated to those in the law enforcement profession who made the ultimate sacrifice in the conduct of their duties in protecting the citizens of Baldwin County.” Every year the sheriff’s office holds a ceremony in front of the sculpture to honor its fallen heroes. 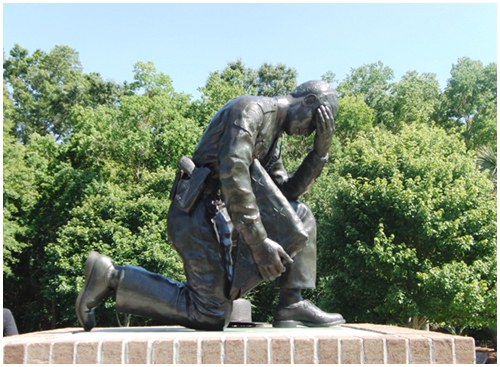