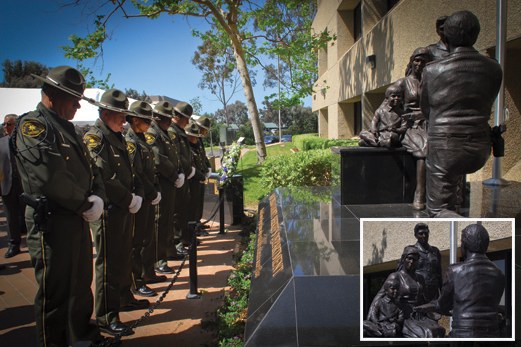 The San Diego County Law Enforcement Memorial was dedicated on May 10, 2011. The bronze statue, entitled “A Tribute to Service, the Ultimate Sacrifice,” depicts a kneeling sheriff presenting a folded American flag to a grieving widow and her son. Behind them, a deputy sheriff stands with an outreached hand to offer support. In addition to this outdoor tribute, the department has a freestanding display in the lobby of the sheriff’s administration center. This display features black granite tiles etched with photographic images of fallen deputies, their names, and end-of-watch dates within a sheriff’s star. Each year on the anniversary of the deputy’s death a small flower appliqué is attached. Smaller versions of this memorial have been displayed at all of the San Diego County Sheriff’s Department facilities.