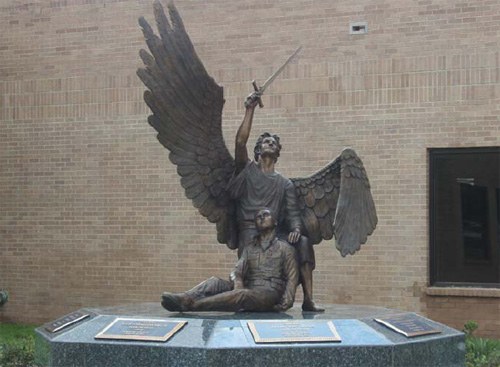 The Odessa, Texas, Police Department established the Odessa Peace Officers Memorial Foundation in October 2007 to honor its fallen officers. Motorcycle accidents claimed the lives of two officers; Corporal Gordon Terry Toal died while acting as a funeral escort in 1982, and Officer Scott Stanton Smith suffered fatal injuries when a motor vehicle struck him as he responded to a burglary-in-progress call in 1988. More recently, Corporals Arlie Jones, John “Scott” Gardner, and Abel Marquez died from gunshot wounds they sustained while responding to a domestic disturbance call in September 2007.

Since 2007, the foundation diligently has raised funds to build a memorial for the department’s five fallen officers. However, the foundation ultimately strives to serve any Texas law enforcement officer in times of crisis; it supports the families and widows of all officers who sustained injuries or paid the ultimate sacrifice in the line of duty.

The foundation finally reached its goal and built a memorial for its fallen officers. The Odessa Police Department unveiled a statue of St. Michael the Archangel, the patron saint of police officers, on September 3, 2010. The department and foundation feel very proud of their monument and their efforts to honor law enforcement officers around the world.