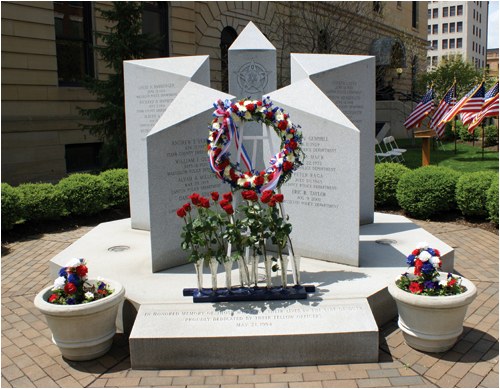 In Canton, Ohio on May 21, 1994, the Fraternal Order of Police (FOP) McKinley Lodge No. 2 Police Memorial was dedicated. This monument is located on the grounds of the Stark County Courthouse in downtown Canton. The effort to erect the memorial was spearheaded by the FOP McKinley Lodge No. 2 and came to fruition after major corporate and community donations. Modeled after the emblem of the FOP star, this tribute to fallen officers is constructed of Berrie Gray Vermont granite. It bears the names of Stark County law enforcement officers killed in the line of duty. The inscription on the memorial, penned by Lt. Edward Hostetter (Retired) of the Canton Police Department, reads: “In Honored Memory of Those Who Gave Their Lives in the Line of Duty. Proudly Dedicated by Their Fellow Officers May 21, 1994.”