Dedicated in January 2011, the Polk County Sheriff’s Office Memorial pays tribute to the law enforcement officers and their K-9 partners who paid the ultimate price while serving the citizens of Polk County, Florida. The memorial, located at the entrance to the Sheriff’s Operations Center near Winter Haven, was purposefully placed so that individuals must walk through the memorial courtyard before entering the building. The monument consists of bronze statues of four fallen heroes standing guard in front of a granite marker in the center of a pond with a rock-strewn waterfall. The first two statues were unveiled on January 18, 2011, depicting a deputy and his K-9 partner and a sergeant. On March 11, 2013, two additional statues were added that portray two deputies killed in the 1980s. The outer barrier of the pond holds granite tiles etched with the names of each hero. While the bronze statues and granite markers memorialize the fallen, the flowing water of the waterfall and pond symbolizes the vibrancy of the community and the continuation of the lives of Polk County citizens. The front of the memorial is inscribed with the words “A Hero Remembered Never Dies,” which captures the timelessness of the memorial and of those who gave their all. 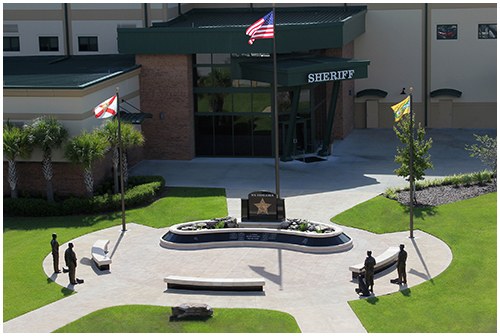 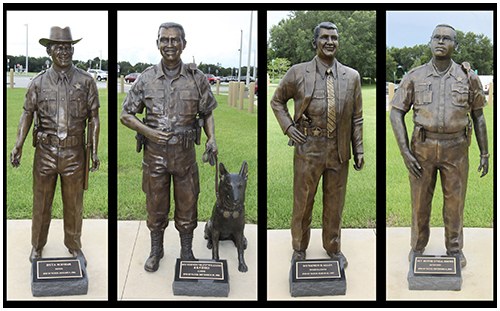 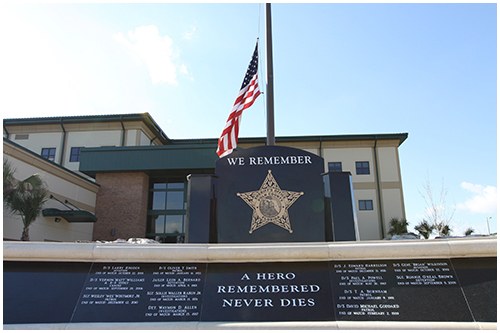