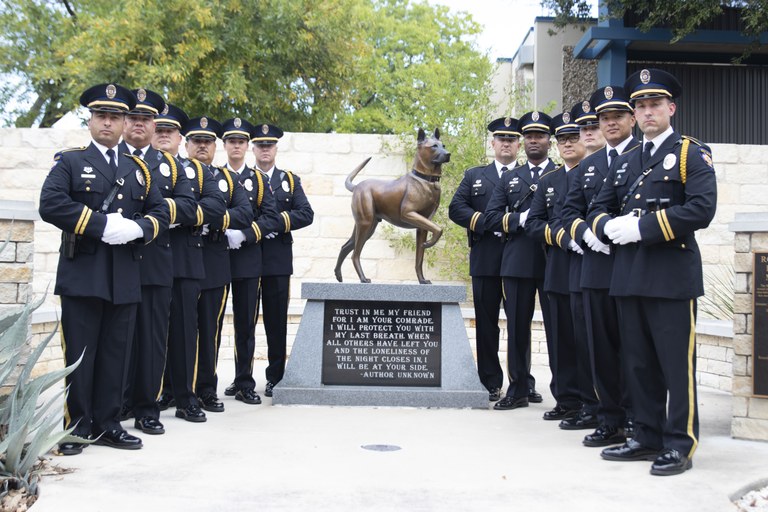 “Trust in me, my friend, for I am your comrade. I will protect you with my last breath. When all others have left you and the loneliness of the night closes in, I will be at your side.”

A bronze, life-size Belgian Malinois statue stands like a protector in front of Round Rock, Texas, Police Department (RRPD) headquarters, with those words inscribed below it. Anyone who has had the honor to work with a K-9 will attest to the sentiment of this quote. The monument acknowledges the service and sacrifice of the RRPD’s four-legged officers.

In the early conceptual stages of the memorial, the city lacked the necessary funds to build it. Officers refused to give up on the idea and partnered with community and family members to host several fundraising events. Their efforts raised over $60,000, and the monument became a reality.

The sculptor chosen for the project said, “I felt truly privileged to be chosen for this commission. After meeting with many current and past K-9 handlers of the police department, I was simply blown away by their intense dedication to fundraise for this sculpture. In this way, they honor canine team members who do not necessarily become noble through birth, but instead through training, devotion, and commitment.”

It took over 400 hours to sculp the statue. Ashes of the department’s deceased K-9s are in its base, and their names are etched on the outside to commemorate their service.

On April 5, 2016, the RRPD dedicated the monument. During the ceremony, officers spoke about a K-9's impact on the community and them personally. Chief of Police Allen Banks spoke about the special bond between dogs and their handlers. This memorial is not only a tribute to the service of K-9s but a testament to what the community and its police department can do through partnership.

The FBI Law Enforcement Bulletin seeks submissions from agencies that wish to have their memorials featured in the magazine’s Bulletin Honors department. Needed materials include a short description, a photograph, and an endorsement from the agency’s ranking officer. Submissions can be emailed to leb@fbi.gov.