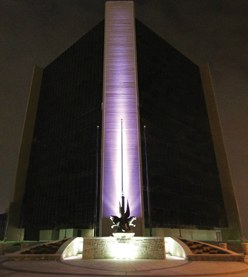 After her husband was killed in an explosion while working on the bomb squad, Mary Galvin approached the police chief and sheriff in Sedgwick County, Kansas. Even though there was a national memorial to fallen officers in Washington, D.C., and a state memorial in Topeka, Kansas, she felt that Sedgwick County should memorialize its local heroes. In 2002, a volunteer committee was formed to plan the memorial.

On April 2, 2011, the Law Enforcement Memorial of Sedgwick County, Kansas, was officially dedicated. The memorial is designed to honor fallen law enforcement officers and to be a public work of art. Twenty-nine officers, dating from 1871 to 2009, are honored on the memorial. The centerpiece of the memorial is a life-size bronze statue of two lions, one male and one female, watching over the community. The lions stand at the base of an eternal flame comprised of a bronze frame and blue glass, which is illuminated. Bronze replicas of the United States and Kansas flags stand between the lions. Behind a wall there is a meditation area where each of the 29 fallen Sedgwick County officers is represented with a plaque and a pair of bronze boots or shoes—in many cases, a casting of the fallen officer’s actual footwear. When viewed from above, the memorial looks like a badge with a black granite bench representing the black mourning band officers wear in remembrance of a fallen comrade.