Trooper Joshua Kim of the Maryland State Police was on patrol traveling northbound on a local interstate crossing a bridge when he observed a male walking on the southbound shoulder approaching the bridge. Turning his vehicle around, Trooper Kim saw the man walking in the right travel lane and starting to climb over the concrete wall separating the roadway from the river 90 feet below. The trooper stopped his vehicle in the right lane and, without hesitation, ran to the subject. As he closed in, the man put his feet over the wall, and his momentum began to swing him over the edge. Trooper Kim grabbed the distraught male and wrestled him back over the wall, saving him from certain death. Further investigation revealed the man was overcome with suicidal thoughts while driving and stopped to jump off the bridge. Several suicide letters were recovered from his wallet and vehicle. 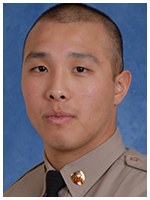