Officer Dustin Clinkscales of the Austin, Texas, Police Department was working a traffic initiative on July 5, 2015, when he stopped a woman using her cell phone while driving. The city recently passed a hands-free ordinance making the use of any handheld device illegal while operating a vehicle. Approaching the driver, Officer Clinkscales noticed she was having difficulty breathing and may be choking. The officer immediately helped her out of the car and patted her on the back with an open palm. When that proved ineffective, he positioned himself behind the driver and performed the Heimlich maneuver, dislodging a piece of food from her throat. The woman then fainted, and Officer Clinkscales guided her to the ground to prevent her head from hitting the pavement. When she regained consciousness, emergency medical personnel transported her to a local hospital to be examined as a precaution. By coincidence the driver is the daughter of another Austin Police officer. 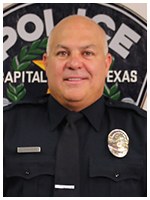