Officers Shamus Ryan and Aaron Penning of the Rochester, Minnesota, Police Department were dispatched one evening following a call received about an apartment fire. Upon their arrival, the officers observed a lower-level apartment engulfed in flames and were told that people were trapped in the residence. Ascending the exterior stairs to the front entrance of the apartment, the officers could hear a woman and small children screaming from inside. The officers broke through the apartment window, forced the door open, and immediately encountered heavy smoke and flames. Entering the burning residence, Officers Ryan and Penning turned on their flashlights and instructed the occupants to walk toward the light. The officers felt their way through the apartment’s interior and found the woman huddling with her children. One by one, they were removed from the blaze and taken to safety. Outside, the officers were made aware that the woman’s 3-year-old daughter was missing. Officer Ryan located the daughter on the apartment landing a short time later and reunited her with her mother. Officers Ryan and Penning saved the lives of the woman and her five children. 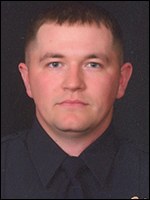 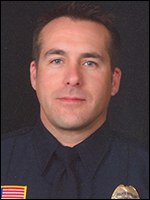