Deputies Joseph Trimboli and Eric Keyes of the Okaloosa County, Florida, Sheriff’s Office responded to an early-morning single-car crash. Arriving at the scene, they observed flames around the rear of the vehicle and spreading inside. The driver, a 45-year-old man who seemed incoherent, was behind the wheel. The windows were up, and doors were locked. Deputy Keyes shattered the passenger-side window in an effort to extract the man, whose clothes already had caught fire. Risking their own lives to save the driver’s, both deputies pulled him through the broken window as the car became fully engulfed. The man was treated for minor burns and smoke inhalation at a local hospital. A subsequent investigation determined he was intoxicated. Deputies Trimboli and Keyes’ quick action in the face of life-threatening danger earned them both the Okaloosa County Sheriff’s Office Medal of Merit. 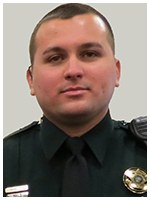 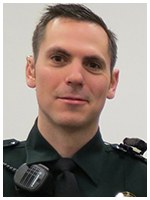