Late one night, a woman called 911 to report that she was trapped in her burning vehicle. The victim could not kick out the windows to escape. Multiple police officers from both the city and county responded.

Officer Timothy Schwering of the Spokane, Washington, Police Department arrived on scene first, just before fire crews. He broke a hole in the driver's side window with his baton, but could not unlock the door. Then, the officer reached in, pulled out the entire window, and helped the woman climb out. A neighbor also assisted in the rescue efforts.

Upon their arrival, firefighters found the engine compartment fully engulfed in flames, with fire venting to both wheel wells. The grille shell and bumper had melted away, forming puddles beneath the vehicle. When another officer arrived on scene, fire personnel urged caution because of the toxic smoke.

One of the firefighters stated, “Officer Schwering acted selflessly and beyond his call of duty to make every effort to remove the occupant from harm’s way. He should be commended for his actions at both the Spokane Police and Fire Department levels.” The victim repeatedly referred to the officer as “her angel” and expressed gratitude that he came to her rescue. She genuinely feared for her life, unable to escape a vehicle that had fire moving up the engine compartment and toxic smoke filling the passenger area. 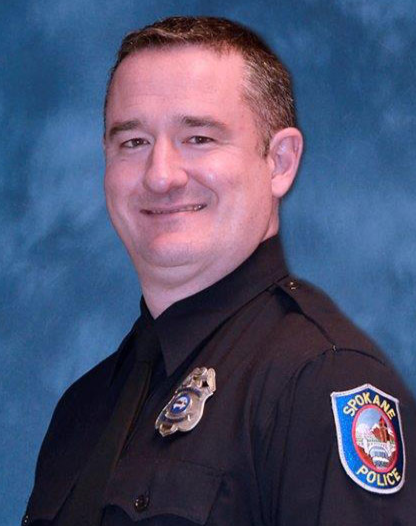