Officer Mark Wilke of the Campbell County, Kentucky, Police Department responded to a call of a couch on fire inside a local residence. When he arrived at the scene, he found the house fully engulfed. In his attempt to locate the homeowner, a 53-year-old woman, he went to the back door and started yelling and banging. He then heard the woman yell from inside the residence that she was on fire. Officer Wilke was able to guide her to the back door, which she unlocked, but she reentered the home soon afterward. He followed the disoriented woman into the residence through thick black smoke and guided her outside. The woman suffered second degree burns to her face and first degree burns to her chest, and Officer Wilke was treated at the scene for smoke inhalation. 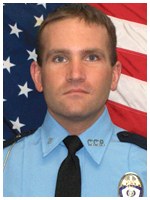 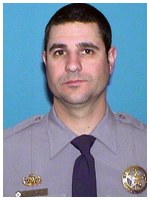 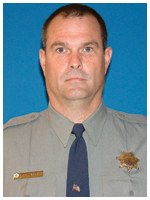 Sergeant Paul Liskey and Deputy Sheriff Robert Brock of the Alameda County, California, Sheriff’s Office were returning from a bomb detail in an explosive ordnance disposal (EOD) vehicle when they noticed a minivan traveling at a significantly slower speed than the flow of traffic. As they approached the van, it drifted into their lane and came to a stop, blocking both lanes. After receiving no response to their emergency lights and air horn, Deputy Brock exited the EOD vehicle and observed an elderly woman in the minivan in a catatonic state, going in and out of consciousness. He attempted to gain entry to the vehicle, but the doors were locked. Deputy Brock then instructed Sergeant Liskey to position their vehicle in front of the minivan to prevent it from rolling away should the driver’s foot slip off the brake. As Sergeant Liskey was doing so, the woman inadvertently released the brake and the minivan began slowly accelerating down the freeway. Deputy Brock ran alongside the minivan as Sergeant Liskey placed the EOD vehicle in front of it. Using the rear bumper of the vehicle, he was able to guide the minivan towards a concrete center divider, where it was pinned. Sergeant Liskey then summoned medical aid for the woman while Deputy Brock gained access to her minivan and rescued her dog. She later was transported to a local hospital, and her dog was picked up by animal control personnel. It later was learned that the woman was a chemotherapy patient who previously had never passed out as a result of her treatment.