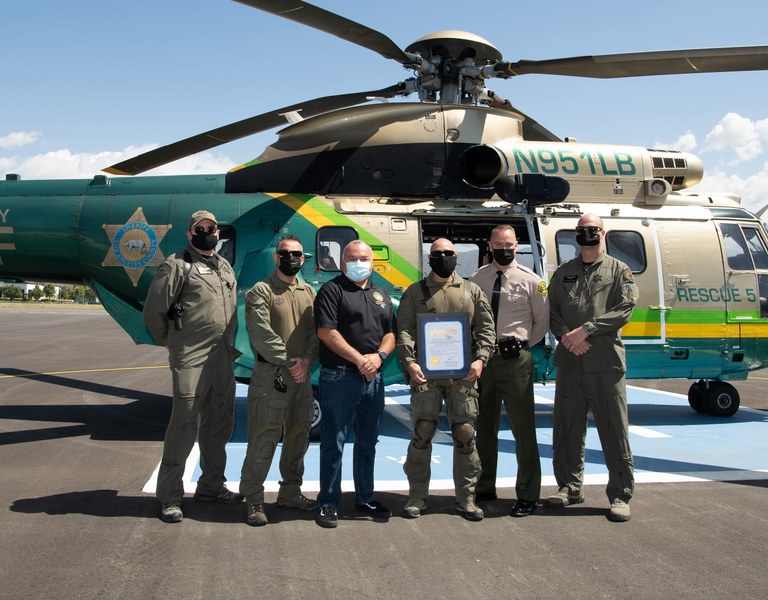 One morning, Los Angeles County Sheriff’s Department’s Air Rescue 5 (Deputies Gonzalo Galvez, Daniel Aleman, and Richard Diliberti and Pilot Deputies Scott Helbing and Rich Thomsen) helicopter was dispatched to the Angeles National Forest after receiving a call stating that a man was hanging from a cliff and in extreme danger of falling.

The crew witnessed a 65-year-old man hanging precariously, headfirst, from a vertical cliff face that descends 100 feet down the canyon. The victim had lost control of his mountain bike and fell 50 feet down the steep cliff face. Miraculously, a rock snagged the biker’s waistband and temporarily secured him from falling further down the cliff to certain peril.

Due to the victim’s unstable position on the cliff, the crew coordinated an improvised rescue plan. Determining that the downdraft from the helicopter would surely cause the man to fall off the cliff, the crew chose not to use the typical rescue hoisting maneuver. Instead, Deputy Aleman, one of the rescue medics, was lowered onto the mountain bike trail a quarter mile up the canyon. Deputy Aleman then maneuvered down the trail to where two of the victim’s friends were holding a small piece of cord they had secured to the man’s right leg.

Unfortunately, due to the barren topography of the surrounding area, there were no secure anchor points, such as trees or large rocks, to anchor Deputy Aleman’s rappelling equipment and safety ropes. The victim was screaming that he was going to fall at any moment, so Deputy Aleman decided to utilize the two witnesses as anchors. After a hasty briefing with the two witnesses, Deputy Aleman rappelled down the cliff face, putting himself in extreme danger of falling due to his unusual and dangerous anchor point.

Once Deputy Aleman reached the victim, he realized the man was unstable because of overwhelming panic and fatigue, making the rescue more dangerous. The victim clung to and shifted his weight onto Deputy Aleman, causing the two witnesses anchoring the rope to sustain twice the body weight they anticipated securing.

Using his calm demeanor, Deputy Aleman smoothly coaxed the man into a safety harness without making any abrupt movements that would shock his safety line. Once Deputy Aleman secured the victim, the crew lifted them back into the aircraft. The man was treated for minor injuries and released to Los Angeles County Fire Department personnel.