FBI Police Officer Jamie Mudge, assigned to the FBI’s Criminal Justice Information Services Division in Clarksburg, West Virginia, was off duty and on a kayaking and camping trip. The area had experienced significant rainfall resulting in high water and aggressive rapids. Near the end of a kayaking run with her group, Officer Mudge noticed several abandoned inner tubes entangled in a fallen tree that extended well into the river. She also observed eight people—adults and young children—clinging to debris further downstream. The distraught group was calling for help, and some of the children did not have life vests on. Disregarding her own safety, Officer Mudge dove into the water and tried to swim against the strong current to offer assistance. The extreme rapids prohibited her from reaching the victims directly, so Officer Mudge swam with the current and reached the campground shoreline downriver, effectively crossing the fast-moving, swollen body of water—approximately 60 feet wide. Due to poor cell phone coverage, Officer Mudge proceeded to the campground headquarters, where she contacted emergency services via landline and then quickly returned to the scene to render aid. She maneuvered several kayaks and ropes to the stranded individuals and used another kayak to rescue victims, including a young child and his mother. 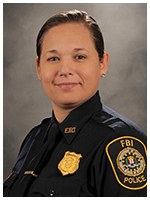