Sergeant Dave Kromschroeder of the Richfield, Minnesota, Police Department responded to a 911 emergency call amidst a major winter snowstorm. When he arrived at the scene, he observed two children who had fallen into a below-ground swimming pool. An 8-year-old boy struggled to stay above the surface of the water in the shallow end of the pool, and a 6-year-old girl floated while unconscious in the deep end. Disregarding his own personal safety, Sergeant Kromschroeder jumped into the deep end to rescue the unconscious 6-year-old. The water was a frigid 32 degrees and approximately 5 feet deep, and the slippery surface at the bottom of the pool prevented Sergeant Kromschroeder from maintaining his footing. Submerged in the icy waters, he was finally able to lift the child from the pool with the assistance of a neighbor. Amidst blizzard conditions, a water-soaked Sergeant Kromschroeder immediately began to administer CPR and continued for approximately 3 minutes when another officer arrived to assist. They continued to take lifesaving measures for an additional 5 minutes until relieved by paramedics. The child was transported to a hospital for treatment and remained in the pediatric intensive care unit for more than a week. Due to the immediate response, decisive actions, and lifesaving measures taken by Sergeant Kromschroeder, the 6-year-old victim made a full recovery with no long-term health concerns. 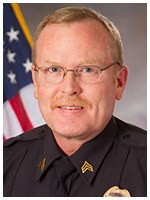 Officer Michael J. Clark of the Santa Rosa, California, Police Department responded to a search for a suspect in a domestic violence investigation. The individual had an extensive history of violence; assaulted his wife, causing serious injury; and violated a criminal protective order. Officers spotted the suspect and initiated a vehicle pursuit when he failed to stop. During the pursuit, the man crashed his vehicle into a cement construction barrier and careened off the highway into a creek bed. Officer Clark went down the steep embankment to check on the suspect, whose car had caught fire. He was alive and conscious, but suffered significant injuries from the crash, rendering him unable to move on his own. As Officer Clark put his gloved hand on the hood of the car to gain leverage, the fabric of the glove began to melt on the metal. He realized that if the suspect was not extracted from the car immediately, he would soon be consumed by flames and perish. Officer Clark climbed onto the hood, grabbed the 270-pound man, and pulled him out of the burning car through the windshield space. Moments after the two made their way to safety, the vehicle became fully engulfed in flames. 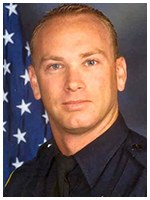