While working by himself one morning at a train station, Officer Victor Ortiz of the New Jersey Transit Police Department received a call to meet an incoming train with a disorderly person onboard. As the officer arrived on the platform, he observed the train approaching and the engineer signaling him that the incident was in the first car. When Officer Ortiz approached the passenger car and the doors opened, the conductor and the subject both exited the train. Upon seeing the uniformed officer, the man raised his voice at the conductor, yelling “You called the police, you called the police, I don’t want to go to jail” and becoming increasingly upset. Officer Ortiz tried to calm the subject and said, “You’re not going to go to jail. Just relax, sit on the bench, and let me talk to the conductor.” Rather than comply, the man crossed the platform and jumped down onto a separate set of tracks where another train approached. Officer Ortiz radioed the police communication center and requested, as he had earlier, that train traffic be stopped. Still on the platform, the officer ran parallel to the suspect in an attempt to head him off. The man began yelling “I want to die. I want to die. I don’t want to go to jail” as he crossed over to the live track. Officer Ortiz told him that he was not going to die.

Seeing the train coming from afar, Officer Ortiz again radioed the communication center, telling them to stop it. The subject laid down on the tracks and refused to move. He kept saying “I want to die. I want to die.” Officer Ortiz kept telling the man that he was not going to die. The officer put a handcuff on the subject’s wrist to remove him from the tracks and place him under arrest. Actively resisting, the man tried to pull Officer Ortiz onto the tracks. The officer continued to navigate the subject, a much larger and heavier man. Just seconds before the train arrived, Officer Ortiz pulled the individual to safety. He jeopardized his life to save someone who wanted to end his own. This man’s life mattered.

After the ordeal, Officer Ortiz placed the subject under arrest and charged him with two counts of resisting and one count each of aggravated assault, interference with transportation, and disorderly conduct. The man also had an open warrant. He was treated immediately by emergency medical services and taken to a local medical center, where he was seen by a mental health professional and released to jail. 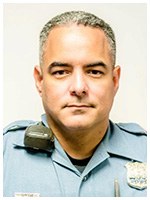