Officer Brian Cantwell of the Berwyn, Illinois, Police Department was on patrol near a commuter-rail station when he observed a disoriented female standing in the middle of the railroad tracks. He immediately exited his patrol car and began issuing verbal commands to the woman to leave the tracks, citing an oncoming passenger train. The woman failed to heed. Instead, she turned and walked backwards in the middle of the tracks toward the fast-approaching express train. Disregarding his personal safety, Officer Cantwell ran onto the tracks and pulled the disoriented subject away from the path of the train, which was sounding its emergency horn. As he moved the woman to safety, another passenger train approached the station at approximately 60 miles per hour. Eyewitness accounts indicated the train was only 140 feet away from striking the officer and the woman. Fortunately, Officer Cantwell’s quick actions also avoided the second train and saved the woman’s life. 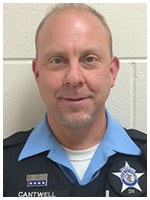