Deputy Stephen Romanik of the Chautauqua County, New York, Sheriff’s Office responded to an early morning single-vehicle accident on Route 83 in the town of Villenova. Arriving at the scene, he saw the front of the vehicle in flames and a citizen trying to aid the driver, a 28-year-old female, pinned in her seat. Deputy Romanik attempted to put out the fire with his patrol vehicle’s fire extinguisher; however, the fire spread quickly, filling the inside of the vehicle with smoke. Disregarding their own personal safety, Deputy Romanik and the citizen smashed the vehicle’s windows with the extinguisher to gain access to the driver. They extracted her from the rear of the vehicle seconds before it became fully engulfed. 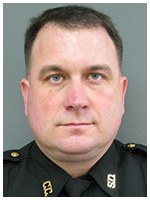