Officer Brian Strockbine of the Evesham, New Jersey, Police Department saved the lives of three individuals in separate incidents within a 10-day period. He received a commendation for his relentless efforts in protecting lives, as well as his role in the arrest of an attempted murder suspect during one of the events.

In the first incident, Officer Strockbine arrived at a residence quickly after receiving a report regarding a deceased female on the front lawn. He was the first responder. Officer Strockbine, after determining that the woman had no pulse and was not breathing, immediately began CPR. After approximately 3 minutes, the victim opened her eyes and began breathing on her own. Officer Strockbine stayed with her until medical personnel arrived. While the woman received treatment in the ambulance, she regained consciousness and provided officers with information that led to her husband’s arrest for attempted homicide, aggravated assault, and evidence tampering.

On the second occasion, Officer Strockbine responded to a call regarding a female who was not breathing. He immediately began CPR on the victim, eventually stabilizing her.

The third event involved Officer Strockbine investigating a car crash with injuries. First on the scene, he noticed that the interior of the vehicle was filled with smoke and about to catch fire. Officer Strockbine broke the passenger-side window and carried the male victim—unconscious and having a diabetic attack—to safety. The man was transported immediately to a local hospital for treatment and survived his injuries. 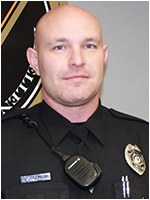