Officer Matt Beck of the North Olmsted, Ohio, Police Department was working a traffic detail on a local interstate when he stopped a male driver traveling 82 miles per hour in a 60-mile-per-hour zone. Speaking with the driver and determining he was intoxicated, Officer Beck returned to his cruiser to request backup. A moment later the driver exited his vehicle and proceeded to walk into lanes of traffic, raising his arms and yelling for cars to hit him. Officer Beck shouted at the driver several times to return to his car, but the man continued to yell at motorists as he crossed three traffic lanes. The officer pursued the man, now in the high-speed lane, and forced him to the ground as he was shouting “kill me.” Gaining control of the driver’s wrist, Officer Beck helped the 340-pound man across three lanes of travel as other motorists swerved around them. Two motorists stopped to assist Officer Beck in taking the driver into custody. The man was charged with speeding and operating a vehicle while intoxicated. 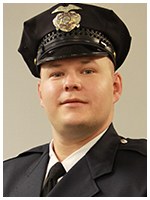