Officer Cindy Romancito of the Gallup, New Mexico, Police Department was driving home one evening after a 12-hour shift when she saw a vehicle drive off the road and overturn. She immediately stopped and ran toward the car, which had caught fire. Hearing cries for help coming from the driver’s side, she looked into the vehicle and saw a male subject hanging upside down from a seatbelt. At great personal risk, Officer Romancito entered the burning car and freed the driver by cutting the seatbelt with a knife. She repeatedly asked the man if anyone else was in the vehicle, to which he responded he was alone. Two individuals then arrived at the scene and assisted in helping the man to safety as the car became fully engulfed. Unfortunately, it later was revealed that an undisclosed passenger perished in the vehicle, despite the driver’s assertion that he was the sole occupant. 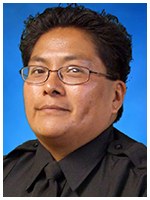 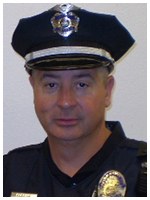 Officer Francis Fleming of the Jackson, Alabama, Police Department was in the midst of booking an individual for armed robbery when he received a call about a man who was unresponsive and not breathing. Arriving on the scene, Officer Fleming confirmed the victim did not have a pulse, and he began using a department-issued automated external defibrillator (AED). He then started CPR and restored the man’s breathing before paramedics arrived 10 minutes later. Officer Fleming’s quick thinking and rapid response time saved the victim’s life.

Nominations for the Bulletin Notes should be based on either the rescue of one or more citizens or arrest(s) made at unusual risk to an officer’s safety. Submissions should include a short write-up (maximum of 250 words), a separate photograph of each nominee, and a letter from the department’s ranking officer endorsing the nomination. Submissions should be sent to the Editor, FBI Law Enforcement Bulletin, FBI Academy, Quantico, VA 22135.