Officer Roland Rendon of the Fresno, California, Police Department was handling traffic enforcement duties when he heard a radio call about a small child who possibly was choking. Officer Rendon was in the vicinity of the child’s address and responded to assist. Upon arriving the officer found the boy unconscious in his parents’ arms. His lips were turning blue. Determining the child indeed was choking, Officer Rendon immediately performed a series of back blows, chest thrusts, and finger sweeps, eventually dislodging a piece of candy from the boy’s throat that was blocking his airway. The child started breathing on his own shortly afterward and subsequently was checked by EMS personnel at the scene. He was released a short time later to his parents with no lasting effects. 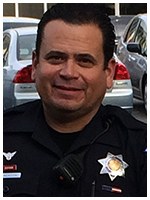