Sergeant Brad Kusmirek and Officers Traci Hall, Kevin Lagos, and Aaron Wolfram of the Hudson, Wisconsin, Police Department, responded to a call about a male subject threatening to jump off of a local bridge into the river below. When the officers arrived, they found the emotional man straddling the bridge fence, threatening to jump if they approached him. All four officers took turns speaking to the man, trying to calm him down. When he closed his eyes and began to say the rosary, Sergeant Kusmirek and Officer Hall ran to him and grabbed his right leg to keep him from jumping. As the man leaned away in an attempt to jump, Officers Lagos and Wolfram also grabbed him, and the four officers pulled him back onto the bridge. The man then was sent to a mental health facility for observation and treatment. It later was learned that he was suffering from bipolar disorder and was going through a divorce. 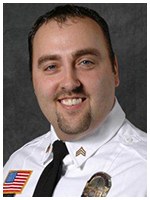 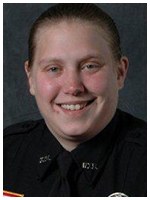 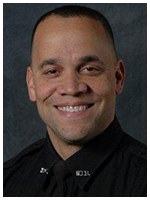