While off duty and playing in a men’s hockey league, Officer Michael Hogan of the Arlington, Massachusetts, Police Department saw a fellow player collapse on the ice. Quickly, he determined that the man was in cardiac arrest and in need of medical care. Officer Hogan immediately directed other players to activate emergency medical services and retrieve the arena’s defibrillator. After providing CPR with help from another player, Officer Hogan administered two shocks as dictated by the unit’s instructions. The victim responded to these lifesaving efforts, regained a pulse, and began breathing on his own. He recovered at a local hospital. 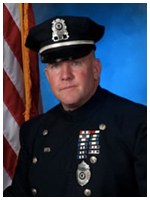