Sergeant Brad Edmonds of the Altus, Oklahoma, Police Department had just finished his shift when he received a call about a residential fire with people still inside. He was one of the first units to arrive on the scene and, after viewing smoke coming from the home, entered to help one of the occupants to safety. He then reentered the home to assist a disabled person who was unable to escape. Though Sergeant Edmonds did not have a breathing apparatus to combat the increasingly thick smoke, he stayed with the person until the fire department arrived. He directed firefighters to the location and departed the residence after the victims were confirmed safe. 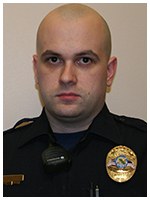 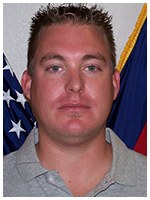 Sergeant Investigator Joel Heap of the Elbert County, Colorado, Sheriff’s Office was on paternity leave at his home in Arapahoe County when he heard what he believed was glass breaking outside his residence. He looked out the front window and noticed that his neighbor’s garage was engulfed in flames. Sergeant Heap awoke his wife, instructed her to call 911, and ran to the neighbor’s house to provide assistance. He knocked vigorously on the front door to get the attention of the homeowner, but received no response. He then kicked in the door and, without regard for his own safety, entered the burning residence. The fire already had spread from the garage into the home with flames mounting up to 30 feet in the air. Battling dark and heavy smoke, Sergeant Heap made it to the top of the stairs and escorted a pregnant woman and her 3-year-old daughter outside to safety. He reentered the home twice to rescue the family’s two pets as the fire continued to spread rapidly. While the woman and her daughter were unharmed, Sergeant Heap suffered smoke inhalation and later was treated at a local hospital emergency room.