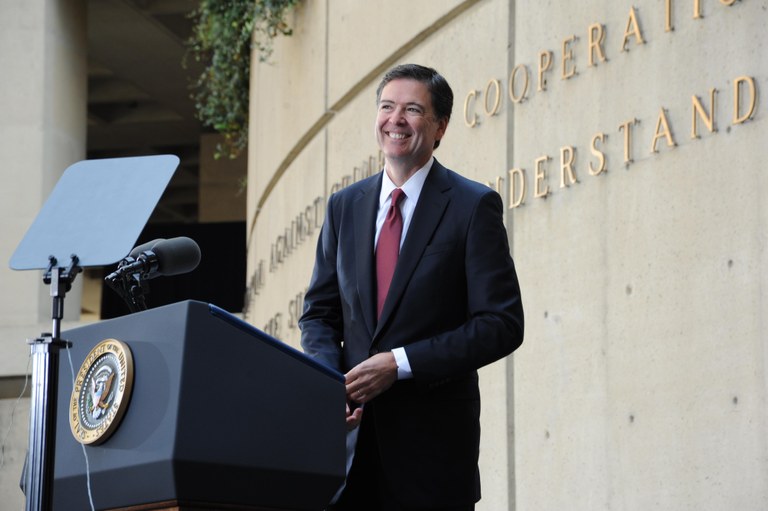 Thank you, Sean (Deputy Director Sean Joyce). Thank you, Mr. President. Thank you so much for gracing us with your presence, for honoring us, and for speaking so eloquently about the mission of the FBI and its great people.

Thank you also to my friends and family who are gathered here today. My entire life is literally represented in this crowd, and it is a pretty picture. These are the people that I have known and loved literally my entire life and from whom I have learned so much.

I’m especially grateful that my dad and my sister and my brothers could be here today. I wish so much that mom could be here to enjoy this amazing day. I can still hear ringing in my entire teenage years her voice as she snapped open the shades every single morning and said, “Rise and shine and show the world what you’re made of.” I found it less inspiring at the time, but it made us who we are. And, I’ll never forget that.

And, to my five troops and my amazing bride, who talked me into being interviewed for this job—of course, with the caveat that she’d be okay because the President would never pick me. I got to tell you, this is your last chance to talk to him about it.

Mr. President, I am so grateful for this honor and this opportunity to serve with the men and women of the FBI. They are standing all around this great courtyard and standing on duty all around this country and around this world at this moment. I know already that this is the best job I have ever had and will ever have.

That’s because I have a front row seat to watch the work of a remarkable group of people who serve this country, folks from all walks of life who joined the FBI for the same reason—they were teachers and soldiers, and police officers and scholars, and software engineers, and people from all walks of life who wanted to do good for a living. They wanted jobs with moral content, and, so, they joined this great organization. 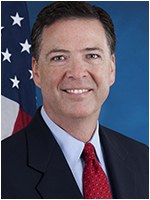 I thought about them as I stood in this courtyard just a week ago and showed a visiting foreign leader the statue that overlooks this ceremony. It’s an artist’s depiction of the words from our shield that the President mentioned: Fidelity, Bravery, and Integrity. And, as I thought about that statue and those words and this ceremony, I thought I would take just a couple of minutes and tell you what those words mean and why I think they belong on our shield.

First, fidelity. The dictionary defines fidelity as a strict and continuing faithfulness to an obligation, trust, or duty. To my mind, that word on our shield reminds us that the FBI must abide two obligations at the same time. First, the FBI must be independent of all political forces or interests in this country. In a real sense, it must stand apart from other institutions in American life. But, second, at the same time, it must be part of the United States Department of Justice and constrained by the rule of law and the checks and balances built into our brilliant design by our nation’s founders.

There is a tension reflected in those two aspects of fidelity, those two values that I see in that word, and I think that tension is reflected in the 10-year term that I’ve just begun. The term is 10 years to ensure independence. But, it is a fixed term of years to ensure that power does not become concentrated in one person and unconstrained. The need for reflection and restraint of power is what led Louis Freeh to order that all new agent classes visit the Holocaust Museum here in Washington so they could see and feel and hear in a palpable way the consequences of abuse of power on a massive, almost unimaginable scale. Bob Mueller continued that practice. And, I will again when we have agents graduating from Quantico.

The balance reflected in my term is also a product of lessons hard learned from the history of this great institution. Our first half-century or so was a time of great progress and achievement for this country and for the Bureau. But, it also saw abuse and overreach—most famously with respect to Martin Luther King and others who were viewed as internal security threats.

As I think about the unique balance represented by fidelity to independence on the one hand and the rule of law on the other, I think it also makes sense for me to offer those in training a reminder closer to our own history. I’m going to direct that all new agents and analysts also visit the Martin Luther King Memorial here in Washington. I think it will serve as a different kind of lesson—one more personal to the Bureau—of the dangers in becoming untethered to oversight and accountability. That word fidelity belongs on our shield.

Next, bravery. We have perpetrated a myth in our society that being brave means not being afraid, but that’s wrong. Mark Twain once said that bravery “is resistance to fear, mastery of fear, not absence of fear.” If you’ve ever talked to a special agent that you know well and you ask he or she about a dangerous encounter they were involved in, they’ll almost always give you the same answer: “Yeah, I did it, but I was scared to heck the whole time.” But, that’s the essence of bravery.

Only a crazy person wouldn't fear approaching a car with tinted windows during a late-night car stop, or pounding up a flight of stairs to execute a search warrant, or fast-roping from a helicopter down into hostile fire. Real agents, like real people, feel that fear in the pit of their stomachs. But, you know the difference between them and most folks? They do it anyway, and they volunteer to do that for a living.

What makes the bravery of the men and women of the FBI so special is that they know exactly what they're in for. They spend weeks and weeks in an academy learning just how hard and dangerous this work is. Then, they raise their right hands and take an oath and do that work anyway. They have seen the Wall of Honor—that I hope so much my friends and guests and family will get to see inside this building—with pictures and links to the lives of those who gave the last full measure of devotion for their country as FBI employees.

Civil War General William Tecumseh Sherman said this: “I would define true courage to be a perfect sensibility of the measure of danger and a mental willingness to endure it.” I called a special agent a few weeks ago after he had been shot during an arrest. I knew before I called him that he had already been injured severely twice in his Bureau career, once in a terrorist bombing and once in a helicopter crash. Yet, when I got him on the phone, I got the strong sense he couldn’t wait to get me off the phone. He was embarrassed by my call. “Mr. Director, it was a through and through wound. No big deal.” He was more worried about his Bureau car, which he had left at the scene of the shooting. He felt okay, though, because his wife—also a special agent—was going to go get the car, so everything was fine.

The men and women of this organization understand perfectly the danger they're in every day and choose to endure it because they believe in this mission. That’s why bravery belongs on our shield.

And, finally, integrity. Integrity is derived from the Latin word integer, meaning “whole.” A person of integrity is complete, undivided. Sincerity, decency, and trustworthy are synonyms of integrity. It’s on our shield because it is the quality that makes possible all the good that we do. Because everything we do requires that we be believed, whether that's promising a source that we will protect her, telling a jury what we saw or heard, or telling a congressional oversight committee or the American people what we are doing with our power and our authorities. We must be believed.

Without integrity, all is lost. We could not do the good that all of these amazing people signed up to do. The FBI's reputation for integrity is a gift given to every new employee by those who went before. But, it is a gift that must be protected and earned every single day. We protect that gift by making mistakes and admitting them, by making promises and keeping them, and by realizing that nothing—no case, no source, no fear of embarrassment—is worth jeopardizing the gift of integrity. Integrity must be on the FBI shield.

So, you see, those three words—Fidelity, Bravery, and Integrity—capture the essence of the FBI and its people. And, they also explain why I am here. I wanted to be here to work alongside those people, to represent them, to help them accomplish their mission, and to just be their colleague.

It is an honor and a challenge beyond description. I will do my absolute best to be worthy of it. Thank you very much.

Director Comey delivered this speech during his installation ceremony at FBI Headquarters on October 28, 2013.