Congratulations, graduates, and thank you for inviting me to speak to you today. Thank you, family, friends, instructors, and law enforcement colleagues, for your presence here today. Your support helped get these graduates through their training, and your support will keep them grounded as they face the challenges of policing our neighborhoods and communities. What a great honor and opportunity to address you on this, the kickoff night of your new careers. Thank you, WCTC Fall Class of 2011, for your commitment to the cause of justice.

President Calvin Coolidge once said, “No one is compelled to choose the profession of a police officer, but having chosen it, everyone is obliged to live up to the standard of its requirements.”1 A commitment to the vocation of law enforcement is a commitment to justice. I’m talking about justice: J-U-S-T-I-C-E. Not all people are cut out for police work, and not all people read those letters the same way. But, to those of us who have answered the call to become police professionals, those letters represent a commitment that is central to who we are, how we act, and what we represent.

Justice is an essential component of the democratic rule of law, and it is a fundamental responsibility of government. In fact, our system of laws, law enforcement, and courts is called the justice system.

Those of you in this class have chosen to pursue the most noble of all professions and, in so doing, have dedicated yourselves to the service of justice.

Nearly 20 years ago, I met someone who had a very strong sense of justice and dreamed of one day becoming a police officer. When we met, I was a rookie cop working the evening shift on a very cold Minnesota December night. It was so cold, the fashion police took the night off. In fact, it was so cold, I was wearing one of those furry cold weather caps made famous in the movie Fargo. You know the one—fuzzy ear flaps with a badge on the forehead. But, as I walked into the police department with my field training officer (FTO), I noticed a striking blonde police reservist talking with several other officers. I never had met her before, but I’ll never forget the first words she ever spoke to me: “Nice dork hat.” Of course, my reply to my FTO was “Who’s the loudmouth in the corner?” I didn’t yet understand that loudmouth was to be my wife. A year later, I pulled her over on a traffic stop and proposed to her. We celebrated our 18th anniversary this year. That is justice. Just seven months ago, and 20 years after she set her sights on becoming a police officer, she was sworn in as a rookie patrol officer in the Town of Beloit. Winter on the night shift is quickly approaching, and I just bought her a fuzzy hat with ear flaps. Now that truly is justice. 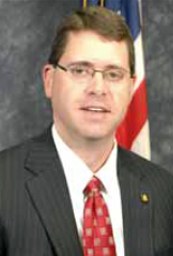 Assistant Special Agent in Charge Jones of the FBI's Milwaukee office delivered this speech at the fall 2011 graduation ceremony of the Waukesha County Technical College Law Enforcement Recruit Academy in Pewaukee on December 8, 2011.

Graduates, as you start your law enforcement careers, I ask that you keep justice at the forefront of your mind: J-U-S-T-I-C-E.

Congratulations on your graduation, and good luck as you move forward with your careers. Be just, understanding, service-minded, trustworthy, intelligent, collaborative, and enthusiastic. That is the practice of justice. Use what you’ve learned, and keep on learning. Practice your skills. Be safe. Law enforcement is not a job. It is a calling. You’ve committed yourself to that responsibility. Now, go do it justice!