Notable Speech: Partners in the Battle

Partners in the Battle 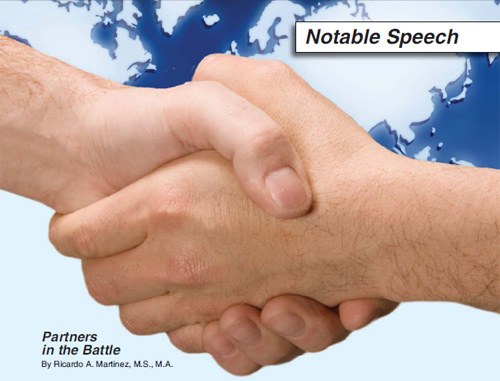 The topic of my speech is the FBI’s partnership with law enforcement in the war on terrorism. In December 2001, FBI Director Robert Mueller restructured FBI Headquarters. As a result, four new executive assistant director positions were created to oversee counterterrorism and counterintelligence programs, criminal and cyber matters, law enforcement services, and administration. Additionally, the National Security Service also was created, combining the mission, capabilities, and resources of the FBI’s counterterrorism, counterintelligence, and intelligence elements.

The FBI has been in existence for a century. It has seen its share of ups and downs, triumphs, and, yes, on occasion, failures. Agents have pursued bank robbers, locked up gangsters, tracked fugitives, put away pedophiles, and dismantled drug organizations. However, a new day has dawned. J. Edgar Hoover’s FBI has changed dramatically in the past few years. It has had to realign its focus as a result of the calamitous events of September 11, 2001. The counterterrorism, counterintelligence, and cyber crime investigations and programs are critical to the FBI’s ability to protect this country’s national security. In the past few years, the FBI has conducted terrorist investigations in such far-flung places as Iraq, Afghanistan, Pakistan, the Philippines, Europe, and Africa; uncovered terrorist sleeper cells and disrupted their financial, communications, and operational lifelines here at home and abroad; and, in conjunction with federal, state, and local law enforcement, searched for and arrested the snipers who terrorized Maryland, Virginia, and our nation’s capitol.

Today’s criminals and terrorists are better organized, better equipped, and much more global than their predecessors. Globalization and the emergence of collaboration between criminal and terrorist enterprises demand a greater degree of synergism between the FBI, the intelligence community, and our law enforcement partners. Working hand in hand with our counterparts in law enforcement, the intelligence community, the military, and diplomatic circles, the FBI’s job is to neutralize terrorist cells and operatives in the United States and to help dismantle terrorist networks worldwide.

Examples of partnerships between the FBI and local law enforcement in the war on terrorism abound. Seven men were arrested as they plotted to blow up the Sears Tower in Chicago and destroy FBI offices and other buildings throughout the country. Law enforcement authorities uncovered a plot to bomb underwater New York City train tunnels to flood lower Manhattan. Six individuals were arrested in a plot to unleash a bloody massacre at the military base in Fort Dix, New Jersey. A plot to destroy JFK Airport in New York City by blowing up a jet fuel artery that runs through residential areas was foiled. These are but a few of a series of homegrown terrorism plots targeting high-profile American landmarks.

One of my critical missions as an FBI supervisor is simple: to build bridges and strengthen relationships between the FBI and the law enforcement community. The director is committed to providing better coordination and communication between the Bureau and its federal, state, local, tribal, and campus law enforcement partners on a national level.

Mr. Martinez, a retired special agent, was chief of the FBI component of the National Gang Targeting, Enforcement, and Coordination Center (GangTECC) in Arlington, Virginia. He delivered this speech to the North Louisiana Association of Chiefs of Police in West Monroe on June 14, 2008.

During the height of Great Britain’s struggles with the Irish Republican Army (IRA) in Northern Ireland, then Prime Minister Margaret Thatcher narrowly missed being seriously injured or killed when an IRA bomb exploded at the Grand Hotel in Brighton, England, on October 12, 1984. The IRA provided this chilling statement directed at the British government after their unsuccessful attempt to assassinate Prime Minister Thatcher: “Today we were unlucky! But remember, we have only to be lucky once. You will have to be lucky always!” Unfortunately, on July 7, 2005, a cabal of Islamic terrorists “got lucky” in London, England.

That chilling admonition should remind us that we always must remain vigilant in our fight against those who hate us and would destroy our way of life. The FBI cannot do it alone! The local police departments, state troopers, campus police officers, tribal law enforcement agencies, sheriff’s offices, and other federal officers cannot shoulder this solemn responsibility by themselves. You, I, and every law enforcement officer in this nation must, and have, become full partners in the war on terrorism!

One of my favorite quotes is by the 19th century British author and philosopher John Stuart Mill: “War is an ugly thing, but not the ugliest of things. The decayed and degraded state of moral and patriotic feeling which thinks that nothing is worth war is much worse. The person who has nothing for which he is willing to fight, nothing which is more important than his own personal safety, is a miserable creature and has no chance of being free unless made and kept so by the exertions of better men than himself.”

Let me conclude by personally expressing the FBI’s gratitude for your dedication and service to our country. Thank you for being America’s front line soldiers in the war on terror just as assuredly as our brave soldiers in Iraq and Afghanistan are fighting the terrorist insurgents, al-Qaeda, and the Taliban. Thank you for your patriotism, your sacrifices, and your exertions on behalf of this great country of ours! God bless you, and God bless the United States of America!