Serve with Courage and Respect 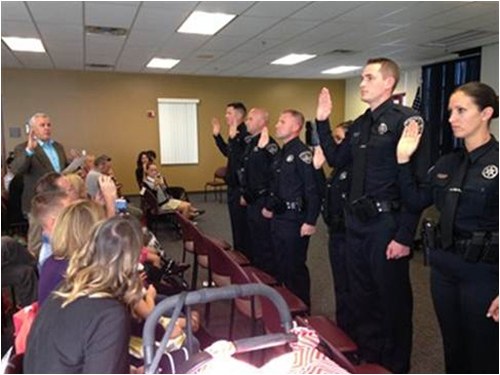 Yesterday marked an important anniversary in our nation’s history. On September 11, 2001, a small group of terrorists attacked structures, including the twin towers and the Pentagon, using commercial airliners. The terrorists actually were attacking our way of life, our American freedoms and liberties.

As we all know, it didn’t work. What we saw from the events of 9/11 was the extraordinary courage of ordinary citizens and dedicated first responders who entered burning buildings to save others and of passengers aboard Flight 93 who joined together in saying “Let’s roll” to prevent the terrorists from taking countless other lives.

These heroes had courage and the willingness to act. The heroes of 9/11 leave a legacy for us today. It won’t likely be an event as significant as 9/11, but you, too, will face situations throughout your policing careers when you will call upon your personal courage, both physical and moral, to guide you in important decisions you must make.

Over the past 6 months you’ve learned much about enforcing laws that protect society from harm. You’ve been well-trained and, I’m sure, eager to begin practicing your skills. Today I’d like to talk about the other aspect of our work as police officers—protecting the individual freedoms and rights of others.

Two days ago I brought you to a place in Boise considered special throughout the world—the Idaho Anne Frank Human Rights Memorial. On the eve of the 9/11 anniversary and at that sacred place, the value of protecting human rights served as a fitting reminder for all of us. I have had the opportunity to visit the memorial often during my tenure as Boise’s Police Chief. This memorial is one of just a few locations in the entire world where the Universal Declaration of Human Rights is on public display in its entirety.

The declaration consists of 30 articles, all having a nexus to human rights. It was published in 1948 by the General Assembly of the United Nations (UN). The UN called upon all member countries to publicize the text of the declaration and to “Cause it to be disseminated, displayed, read, and expounded principally into schools and other institutions without distinction based on the political status of countries or territories.” 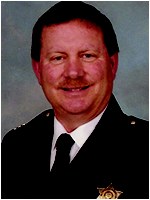 Chief Mike Masterson of the Boise, Idaho, Police Department delivered this speech to the graduating class of the Boise Police Academy on September 12, 2014.

Why is it important? Alongside the 6 million Jewish victims of Nazi persecution, hundreds of thousands of others—including union members; lesbian, gay, bisexual, and transgender people; persons with disabilities; and those attacked simply for their race and religion—were targeted by Hitler's regime. These are special populations within our community, still sometimes vulnerable to hatred and discrimination and denial of rights simply because of who they are or what they believe. It is a particularly important message to those of us in policing. For those of you just starting your careers, always remember that policing in a free society begins with the police protecting and respecting our freedoms to practice the religion we choose, to speak freely, to protest government, and to peaceably assemble for whatever cause, gun rights to gay rights. 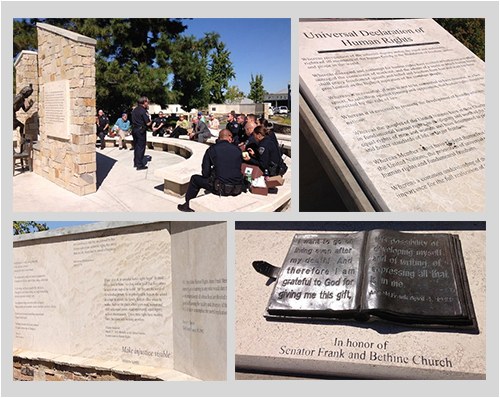 Respect must be given to all individuals at all times. We believe we can best earn that respect by first respecting the rights of others. We respect rights by valuing people’s differences. Police officers must be at the front line of serving our most vulnerable populations with justice, respect, and dignity.

The message I want you to carry with you from today is that the courage you will need in policing is not only physical—about risking your life for another. It also is courage in the form of restraint and providing protection to others.

At the memorial I introduced you to three special people I’ve met while police chief who I’ve asked to share their stories—personal stories of discrimination in the areas of race, religion, and sexual identity. Their courage comes from an obligation to see that injustice done to them and their communities ends and is not done to others.

All of us have a role in speaking out, particularly on behalf of others, for social justice, antidiscrimination, and equal rights. The speakers you heard made a choice not to remain quietly submissive. That’s courage. You heard from people who feel so strongly about these issues that they have been arrested for civil disobedience, or, as you heard Rabbi Fink describe it, “I was exercising the moral obligation of my civic responsibility.”

I’m reminded of the importance of our guests’ words and actions and their courage to speak out by the inscription on the Idaho Human Rights Memorial Wall:

Those words are credited to Martin Niemoeller, a German Protestant minister who was leader of the Church's opposition to Hitler. He was interned in Nazi Concentration camps from 1937 to 1945.

Robert F Kennedy said, “It is from numberless diverse acts of courage and belief that human history is shaped. Each time a man stands up for an ideal, or acts to improve the lot of others, or strikes out against injustice, he sends forth a tiny ripple of hope.”

The three speakers you heard from Wednesday, plus hundreds, even thousands, more are the tiny ripples of hope in our community. And, we protect their rights to peacefully assemble and to speak out.

Remember the tree being planted at the memorial, the symbolism that Anne Frank references in her diary as representing her longing for freedom. Boise is the City of Trees, so the symbolism will be with you daily on patrol. Above all, remember the message of the memorial: to recommit to the importance of a community that embraces, protects, and recognizes the rights of all its communities.

When you return to the Boise Police Department and walk along our honors hallway, you will see the words of C.S. Lewis, “Courage is not simply one of the virtues, but the form of every virtue at the testing point.”

You are now at the front line of our mission: protecting, serving, and leading your community to a safer tomorrow. Protect citizens from crime, arrest those who violate the law, and safeguard everyone’s rights by your actions. Provide the highest level of customer service. We work for the greater good of the community and serve others. Be part of your community, intimately connected to the community you police, and, by all means, give back to the community in the many ways other members of the Boise Police Department have so proudly done in the past.

Have the courage to do what is right for others. Our emphasis on courage should not come as a surprise to you. It was one of the important questions we asked in our employment interview and is one of the main reasons you are here today. Courage is a Latin term that is translated “from the heart” and speaks of the quality of mind or spirit that enables a person to face adversity without fear.

Members of the Boise Police Department are committed to achieving our city’s vision of making Boise the most livable city in the country by working in partnership with our community to prevent and solve crime, address perceptions of safety, and solve problems. Our work matters.

My challenge and my hope for you is for you to spend your career protecting the safety of others; making a difference in the lives of those we serve, perhaps, in small, but meaningful ways; and changing things for the better. My advice: start now as you will soon learn, as I have, that your career in policing will be over before you know it, and you will look back and ask yourself, Did I make a difference? Did I matter? And, the answer should be an unequivocal yes.

If you don’t remember my remarks, remember this: the poster Rabbi Fink showed you that reads “with great power comes great responsibility.” Our citizens, our customers, those we serve entrust us with great power and expect us to use it morally and responsibly to protect and preserve human dignity and life.

I, my colleagues who wear the same badge, and the people of this city trust you to perform those duties with honor, respect, integrity, and courage. Welcome to the Boise Police Department and a noble profession.